I have a rotating schedule of four days on, two days off.  That means that, on occasion, my days off will fall on a weekend.  The thing about back roads, is that while during the week they are near to deserted, the same cannot be said for weekends, as I discovered on Sunday.  I decided to take another trip up Glen Rosa Road, only this time, turning off to find Jackpine Lake.  There was traffic.  Not a lot of traffic, but way more than I’m used to. Between the trucks speeding down the gravel roads and the hunters that scared the crap out of me with their gunfire, I didn’t think I would be seeing much in the way of wildlife.  That turned out to not be the case.  There were White-tailed deer and Snowshoe Hares.  One cluster of boulders alone housed Yellow-bellied Marmots, Columbia Ground Squirrels and a gazillion Yellow-Pine Chipmunks. 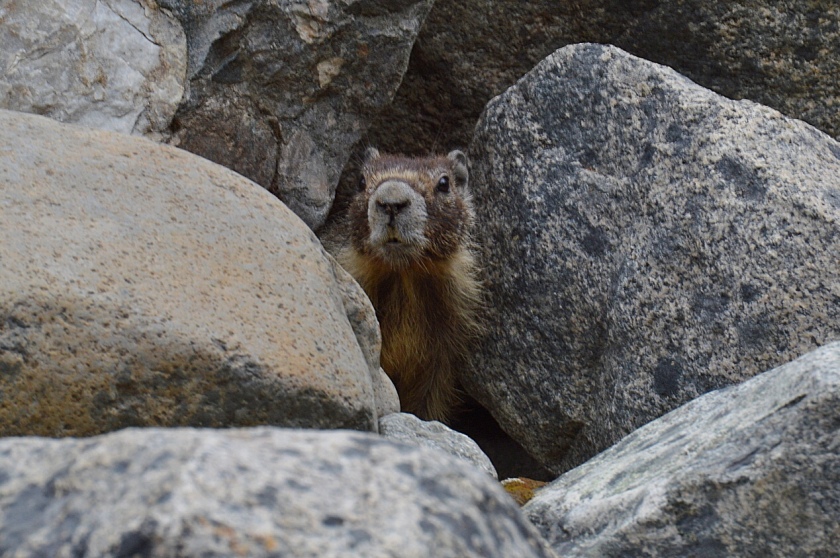 I arrived at Jackpine Lake, still fairly early in the day. 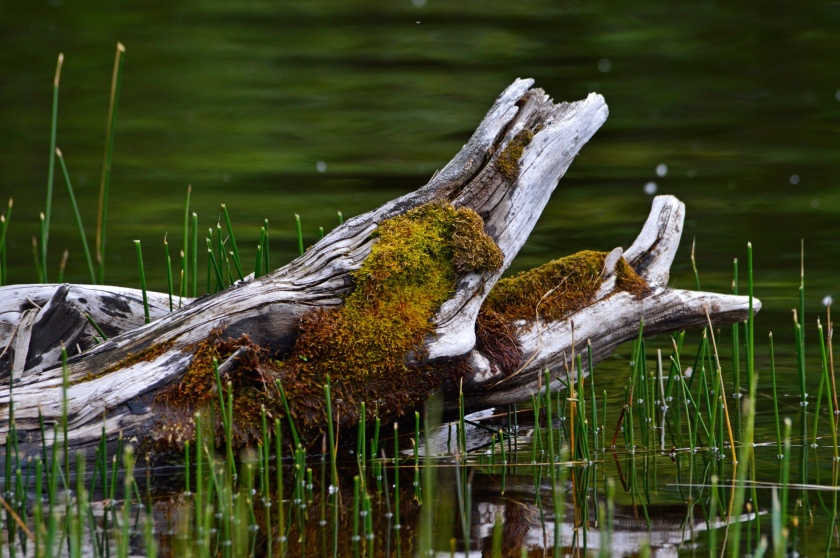 Stump in the Water 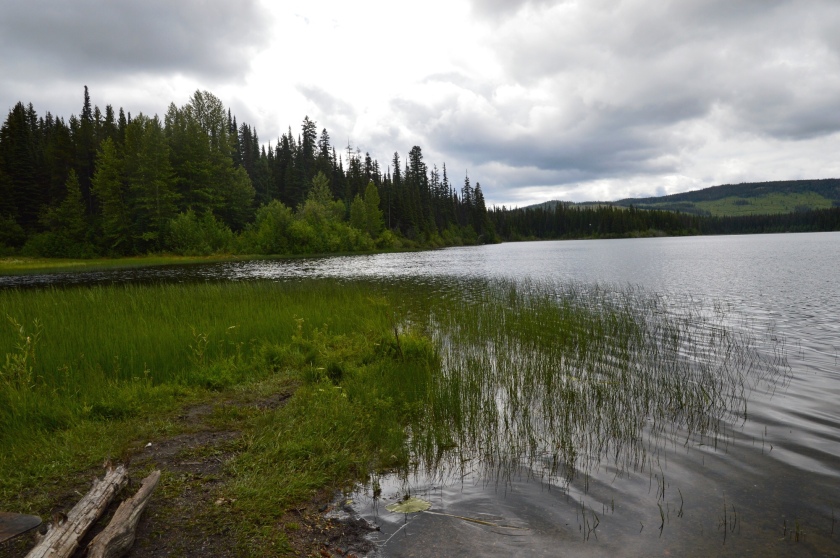 The fish were jumping and the mosquitos were thick.  I walked out onto a muddy spit to take a picture of the lake.  My flip-flops were sinking in the mud and making a weird, loud slurping sound.  I realized that I might lose them and turned around to go back.  Out of the corner of my eye I spotted the frog.  He was sitting on a rock next to where I stood.  My camera was equipped with a wide angle lens, and my other lens was back at the picnic table. 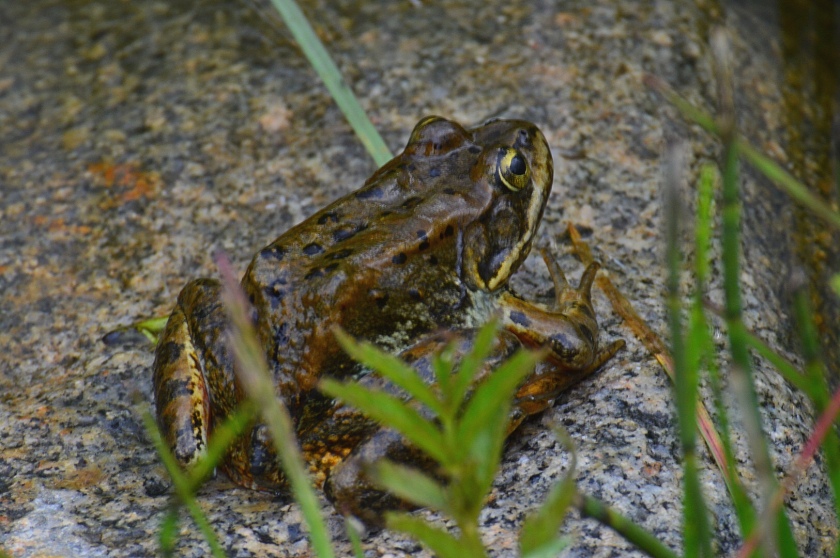 I enjoyed seeing the lake, and of course, my excitement at finding the frog had already made the whole trip worthwhile, but what really made this day special was the flowers. 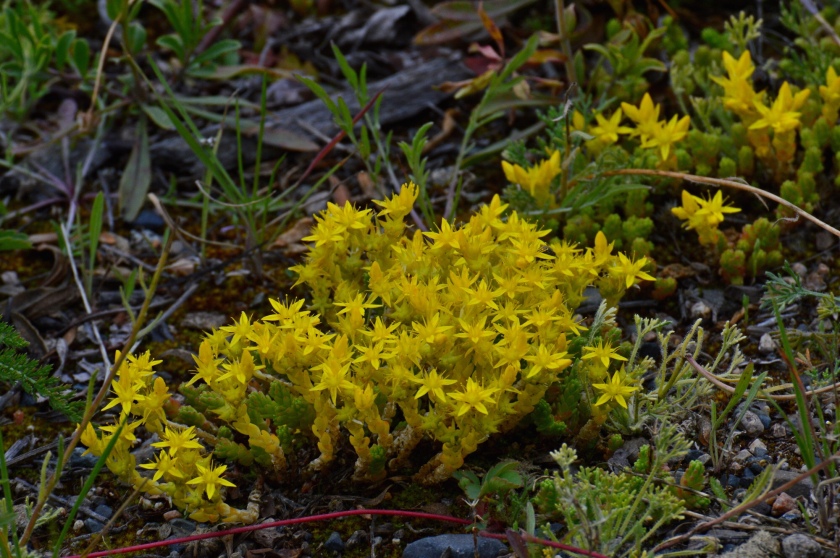 The Southern Interior of BC is resplendent with wildflowers and this part of the year must be the peak of the season. 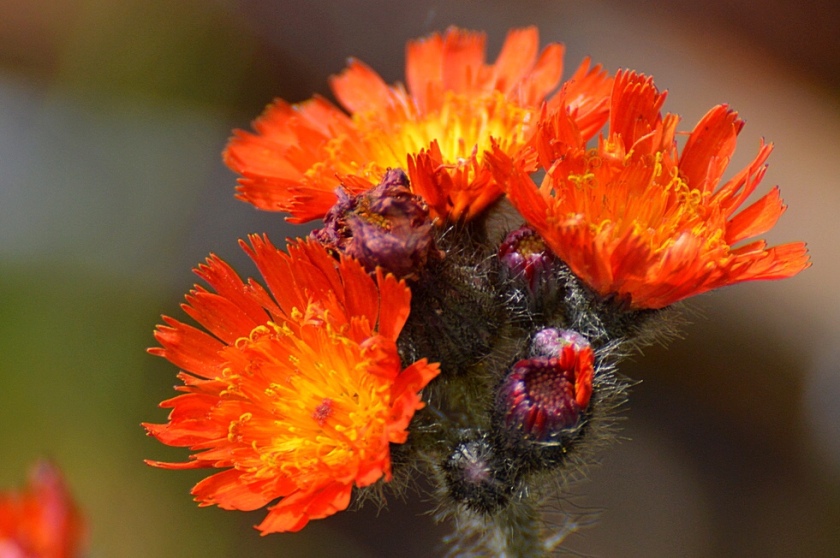 The variety and abundance was simply amazing.  I knew I was going to regret having to look up so many different flowers, but I just couldn’t stop myself from taking the pictures. 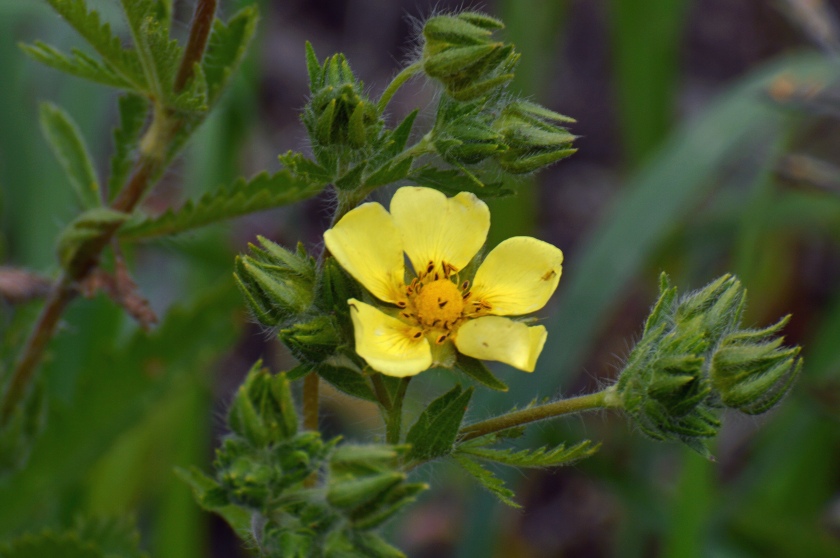 Here are a few that I found and was able to identify – maybe. 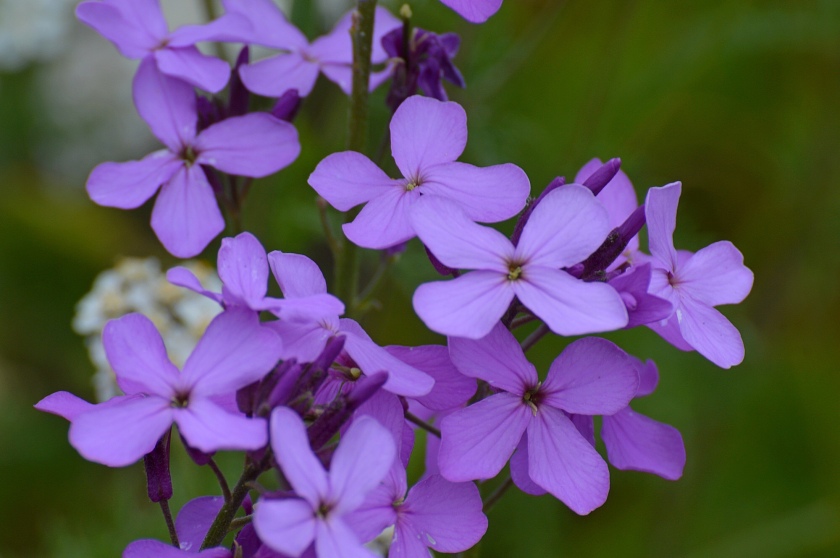 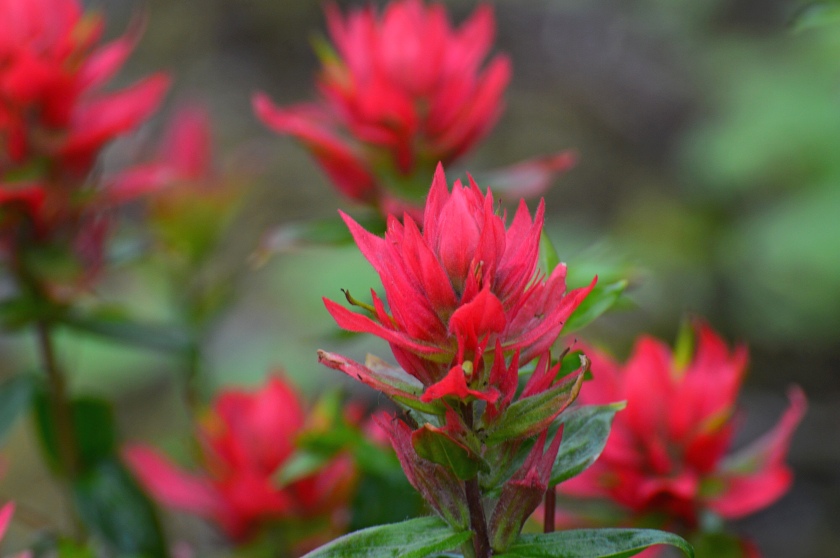 I took my time on the way home.  I followed a logging road up into the mountains and thought I’d like to come back and explore further on another day.  It would have to be another weekend, though.  I can’t imagine encountering a full logging truck on a road this narrow. 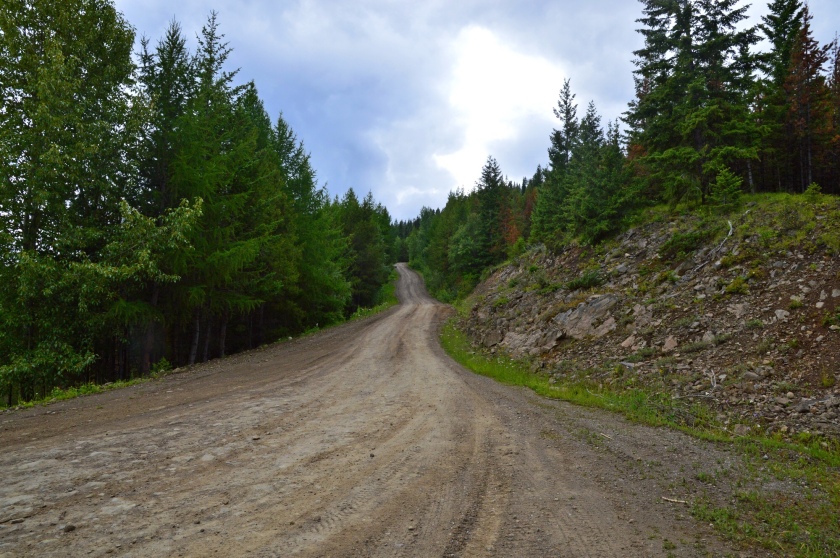 I made it back to the main road, encountering more vehicles.  But somehow, I had gained a new perspective.  Previously, I thought that the reason people were so resistant to the development of a National Park in the area was because of the regulations it would bring.  No more forging new trails, random bonfires and target practise.  But the city of Kelowna, with a population of 180, 000, draws almost 2 million visitors per year.  A National Park in the area would draw attention to some of the lesser known places.  Maybe the people here just want to keep a little piece of it to themselves. 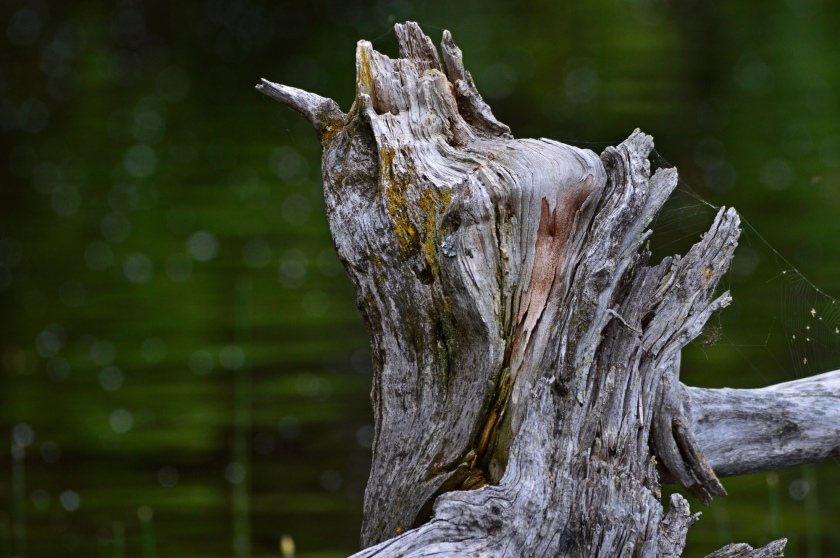 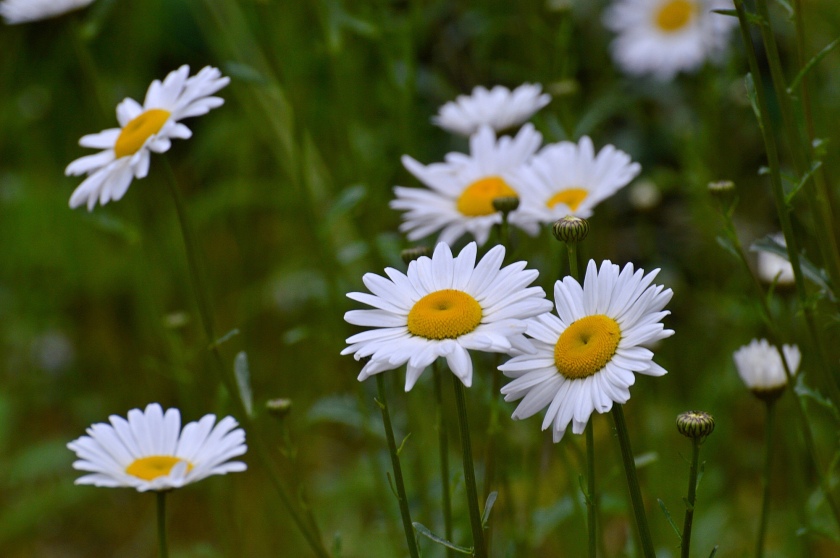 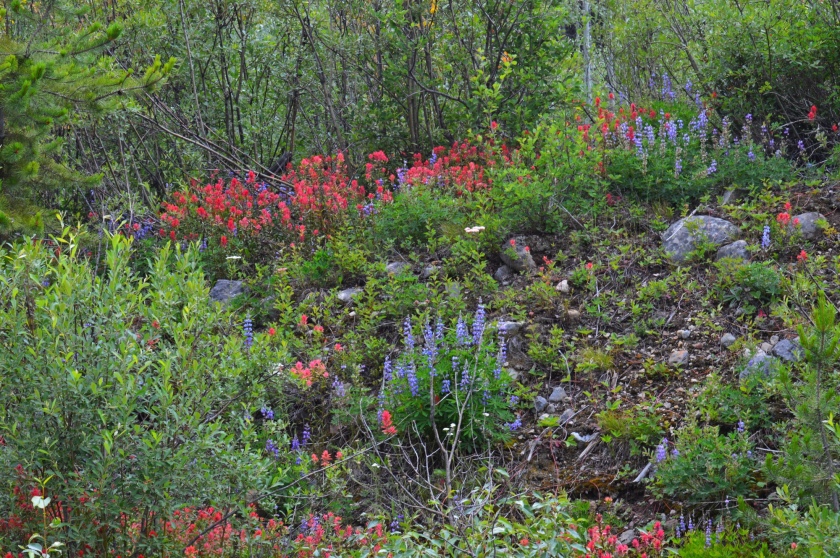 Can’t say I blame them.