It was my first vacation in 30 years.  It was meticulously planned, down to the last detail.  Yes, the forecast was for rain all week, but I used to live on the island.  I was sure I could handle that.

The Kia was loaded up and ready to go, armed with everything we might need and then some.  I picked Santana up from work and we were off.  The plan was to go as far as Hope, spend the night and hopefully arrive in Qualicum Beach at a reasonable time the following day.  We found a place in Hope where we could rent a one room “cabin” for little more that the price of a campsite, saving us the hassle of setting up the tent in the rain.  It was perfect.

Our second day was just as perfect.  Two of my best friends from the island had arranged the rental of a condo on the beach for the four of us to share.  Have you ever had a friend that you haven’t seen for a while and you just pick right up where you left off?  It was like that. We spent the night talking and laughing, sharing stories from the past as though I had never been gone. I am lucky to have such friends.

The following day saw us headed for the West coast of the island.  We stopped in Cathedral Grove, or, as I like to call it, the Church of Emily Carr.  This is the forest of my dreams. 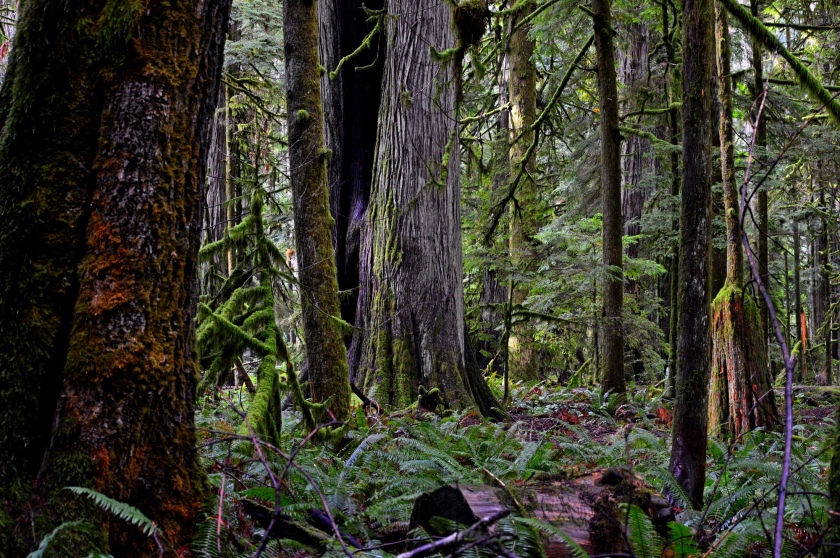 Deep, cool green, moss-covered everything, and a silence that makes you stop and listen.

The skies began to clear as we neared the Pacific Rim National Park.  By the time we got to Wickininish Beach, it was clear blue, all the way to the horizon.  The tide was coming in, and the waves were high and wild.  The unending thunder of the waves is the song in my heart and I rejoiced to hear it again.

Ah, but here’s where our story starts to turn.  You knew it was going to.  The tip-off was that this vacation was meticulously planned.  When has that ever worked out?  I had purchased a park pass, and sent Santana back to the Kia to hang it from the visor.  He was gone only a few moments before joining me on the beach.  He put on his rubber boots and was trying, unsuccessfully, to jump the incoming waves.  Here is a photo of Santana on the beach.

This is the exact moment, unnoticed by either of us, the keys to the Kia fell out of his pocket.  (See arrow and circle)

Now, you wouldn’t think that the loss of a key was that big a deal, except in this case it was.  Last year when my purse was stolen from the beach, I went to the Kia dealership to have a new one made.  Unfortunately, unless you have the “master” key, a replacement can’t be made.  I purchased the Kia second-hand and didn’t have the master. My only option was to replace the entire “immobilizer” unit, at a cost higher than what I had paid for the vehicle.

The nearest Kia dealership was in Nanaimo.  I was looking at $500 for towing, $1500 minimum for a new unit, and God only knows how much for labor.  I called the dealership in Nanaimo, as it was getting late in the day.  It was then I was told that the part I needed was no longer being made.  We were hooped.

Poor Santana was beside himself, thinking he had ruined our vacation.  But here’s the thing – stuff happens.  Stuff is always going to happen, and how it goes from there depends a lot on how you react to it.  Getting angry wasn’t going to do anyone any good.  Besides, it could have just as easily been me.

Our campsite at Mackenzie Beach was already paid for.  I reasoned that if I had the Kia towed there instead, I would buy myself three days to figure out what to do next.  So that’s what I did.  I had our entirely useless vehicle towed 35 km from one beach to another, using up my last BCAA call for the year.  The tow truck had to be dispatched from Port Alberni and because of highway closures for construction at Kennedy Lake, we had a three hour wait.

We went back to the beach.

Santana had been walking up and down, hoping to find the keys, but the ocean had already claimed them.  I wanted to explore some tide pools.  I didn’t know if I’d get another chance.  I climbed up on the rocks, if you can imagine that, and took some pictures. 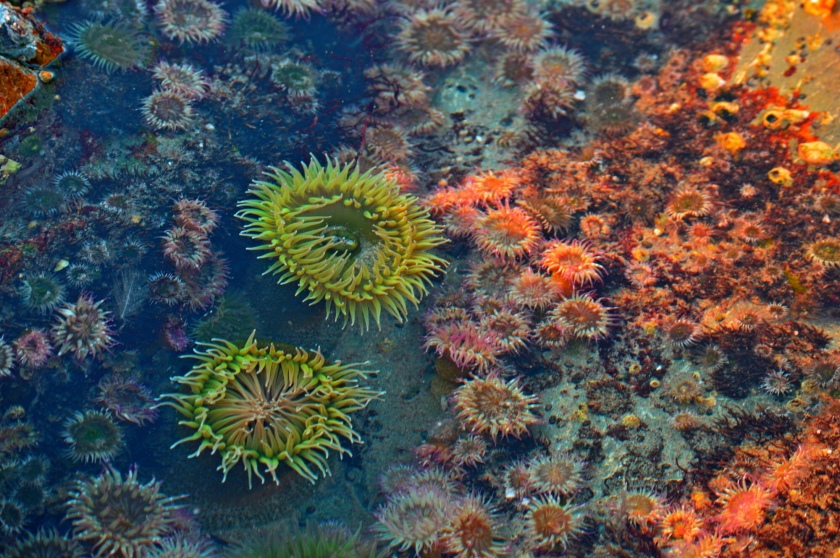 Getting down again proved to be the bigger challenge and I ripped my leg open on some barnacles.  I had a first aid kit in the Kia, but, oh yeah, it was locked.  I’m not the brightest crayon in the box.

Bleeding and bruised, feeling utterly defeated, we finally arrived at Mackenzie Beach in the dark.  Our phones were almost dead, so we parked ourselves in the office area to recharge.  I had already decided what I was going to do.  I had to buy another vehicle.  I went on Kijiji and started looking around.  I found a couple of likely options and left messages.  We dragged only what we needed down the hill to the beach and set up camp.  We forgot to bring the tent fly down with us and were too exhausted to climb back up the hill to find it.  Hoping that the rain wouldn’t return in the night, we slept under the stars and the gods cut us some slack.  It was a beautiful night.

In the morning, I called one of my friends in Qualicum.  I hadn’t received a reply from any of the ads I’d responded to and I was a little worried.

“Go,” she said, “take your whale watching trip.  Enjoy your vacation.  We’ll see what we can work out on this end.”

It wasn’t the vacation I had planned.  There was much about it that needed to be adjusted.  But it was wonderful all the same.  We went on our whale watching tour. 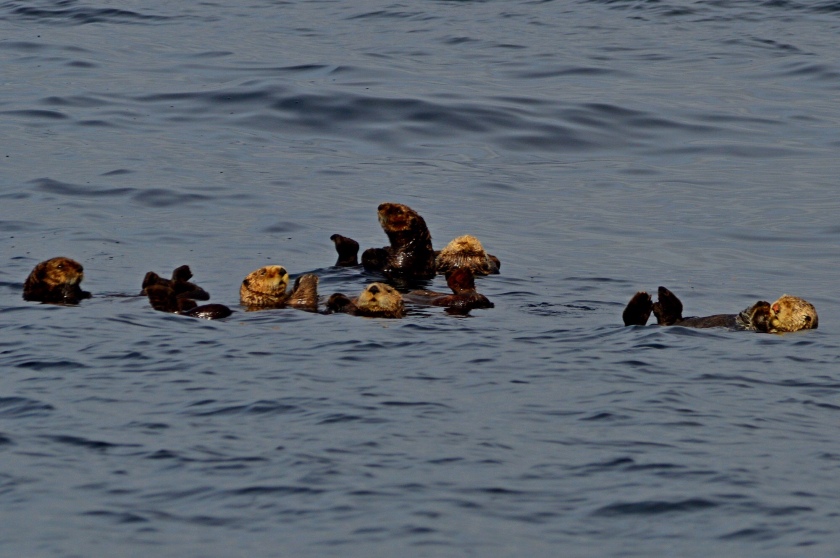 We took our Cultural Canoe excursion. 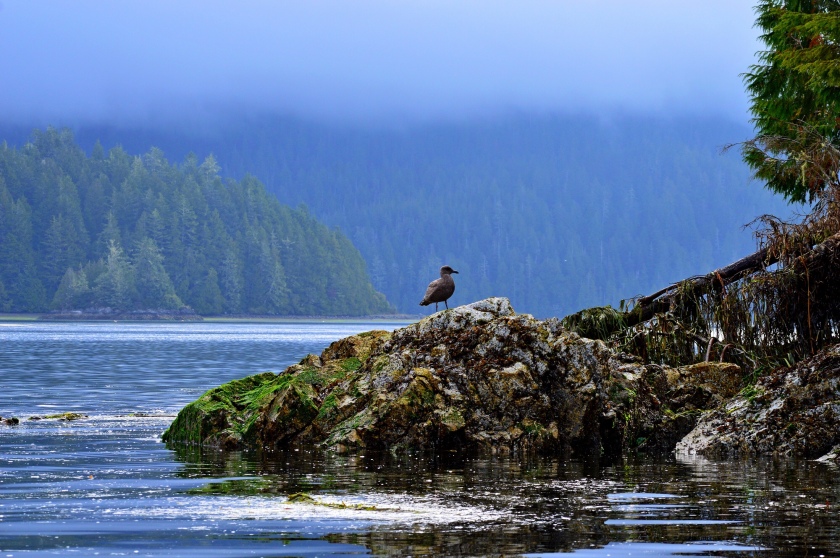 We even made it out to Meares Island for a one night stay in the hostel there.  That was the only night that it rained, by the way.  There was a fire pit in a covered gazebo.  We had a campfire, made s’mores and listened to the rain.

I found a scrap metal guy to come out and take the van away.  My friend, Becky, and her partner, Tim, came out to pick us up.  Turns out, Tim had a vehicle he was willing to part with at a very reasonable price.

Did I mention how lucky I am to have friends like this? 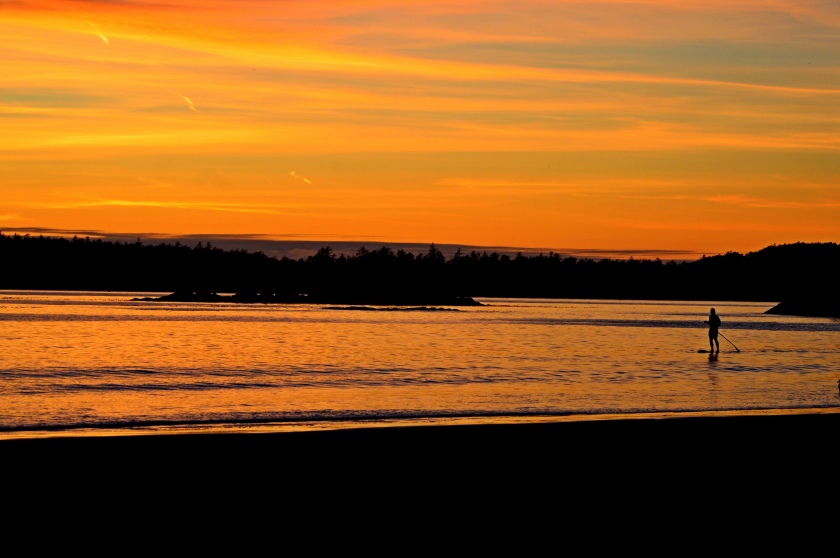 Maybe it wasn’t the “Emily Carr Vacation” that I had in mind, but it was a pretty damn good one.  And there’s always next year.

6 thoughts on “Tofino or Bust!”