I have this fantasy.  I call it “The Emily Carr Vacation.”  Emily Carr had an old caravan.  She would have it towed out to some remote location on Vancouver Island, where she and her monkey, Woo, would spend a week or two in isolation.  Emily would sketch and write and paint, sleeping in her caravan and presumably, cooking on a camp stove or fire.

As someone who rarely had even a weekend off, the idea of spending a week or two engaging in creative pursuits was a dream that kept me going during some difficult times.  I got into the habit of making the most of whatever time I could carve out of a busy schedule.

This past weekend was the Creative Ink Festival, held in Burnaby, BC.  I’d never attended a writer’s conference before and I was thrilled at the idea of spending a weekend attending lectures, panels and workshops.  I arranged to share a ride with a friend on the organizing committee and started making plans.  When I noticed a blank spot in my schedule, I decided to “Emily Carr” the weekend by doing a little bird photography.  With a little help from the Birds of BC community on Facebook, I decided to visit Burnaby Lake.

Friday morning was clear and bright.  By the time I left my hotel room just before 9:00 am, the temperature had already reached 14 degrees Celsius.  My cab driver was a bit confused about how to get to the location I requested and I ended up having to pull out my phone and have Siri give him directions.

After that, it was smooth sailing.

The recommendation I had received was for the Piper Spit entrance to the park.  This is located on the North side of the lake, at about the mid-way point.  Here you will find the Burnaby Nature House, open on weekends from mid-May to Labour Day, a watchtower, and a boardwalk that leads out onto the spit.  Burnaby Lake has miles of walking trails and many of the trailheads can be found at Piper Spit.

The lake itself is 3.11 square km and, according to Wikipedia, home to at least 70 species of birds, although as many as 214 species will visit during the year.

Surely, I would see something wonderful!  I had heard that a Mandarin Duck had been sighted and photographed quite regularly at Burnaby Lake and while there is some debate as to whether it is a wild duck or someone’s escaped pet, I really didn’t care.  I had never seen one before.

But the big surprise, as my son and I walked out onto the spit, wasn’t the Mandarin Duck.  It was a pair of Sandhill Cranes standing in the shallow waters of the lake.  I’m relatively new to birding and had only seen a Sandhill Crane once before, nesting in a quiet, marshy area of Water Valley in Alberta.  These two were much closer and I was able to get a couple of shots in before they lifted off for better fishing on the far side of the lake.

We wandered along the spit, enjoying the sight of so many varieties of duck on the lake.  I didn’t spot the Mandarin, but there were Wood Ducks, Green-Winged Teal, Bufflehead and Ring-Necked Duck.  There was also a Eurasian Widgeon – a lifer for me.

If you’re not familiar with birding, you should know that birders keep lists.  Sometimes the lists can be quite detailed and complex.  I only keep three lists, the most important of these being my life list.  As the name would suggest, a bird gets added to this list only when I see it for the first time in my life.  That bird is universally referred to as a “lifer”.  Once you’ve been birding for a while, lifers tend to be few and far between and are reason enough to do a little happy dance when no one is looking.

To my delight, I had the opportunity to dance again when I spotted a Spotted Towhee hopping along the boardwalk.

Detail, Water on the back of a Canada Goose

The day was growing even warmer.  After a brief rest in the shade, we followed one of the trails into the forest.  Fresh catkins attracted birds and bees.  Moss was thick on the trunks of trees while ferns unfurled new growth from beneath last year’s remains.

At a fork in the trail we paused, considering our options before turning toward the watchtower that overlooks the lake.  The watchtower has a ramp that makes it wheelchair accessible, but we took the stairs and climbed to the top.

The air was perfectly still, without even a whisper of a breeze.  From this vantage point, we could see even further along the lake, and the spectacular views of Lougheed Town Centre to the East and Metrotown  to the West, beyond the wild spaces.  A cacophony of sound rose from the ducks and geese gathered on the lake below.

View of Metrotown from Burnaby Lake

Alas, my legs are not what they once were.  I knew I wouldn’t be able to tackle one of the other trails and still make it back to the conference in time for the first lecture.  We took our leave. 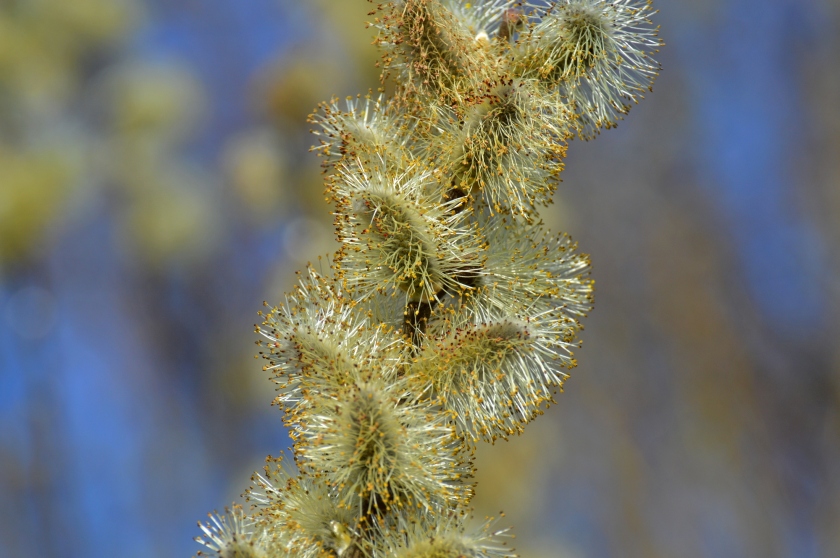 Catkins along the trail, Burnaby Lake

“Why Featherstone?”  Joe asked. “Is that your hippy name?”

Well, Joe, I suppose in a way, it is.  I’ve reached a point in my life where I need to follow what the quiet voice inside has been trying to tell me for years.  I need to let go and be who I was meant to be all along.  The name Featherstone reminds me that it is possible to be grounded and still able to fly.

Inside these pages you will find poetry, photography and a few random thoughts.  I hope you enjoy your visit.